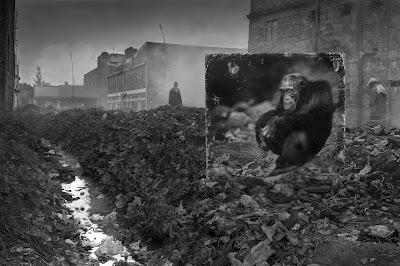 The transformative power of context, part 2:
The portrait of the chimpanzee in a river bed was taken back in 2003, but as with all the animal portraits in Inherit the Dust, it was never released. I had rejected the original portrait because I had hoped for more of an emotional connection with the chimp - that he might be looking at me.
But here in the alleyway location, with his head bowed, he appears, in my mind, to be lamenting the loss of the world that he once knew, and the denuded world that is now there in its place. The photo of the chimp becomes much stronger, I believe, due to the context in which it is now placed.
As always, the panel of the chimp portrait was placed on location (NOT dropped in via Photoshop) next to a semi-stagnant stream of fetid sewage (where perhaps a creek with clear forest water once ran?)

Technical :
Shot on medium format black and white film with a Mamiya RZ67 Pro II, the final panoramic image is constructed of several negatives to capture the wide field of vision, which were pieced together in photoshop.