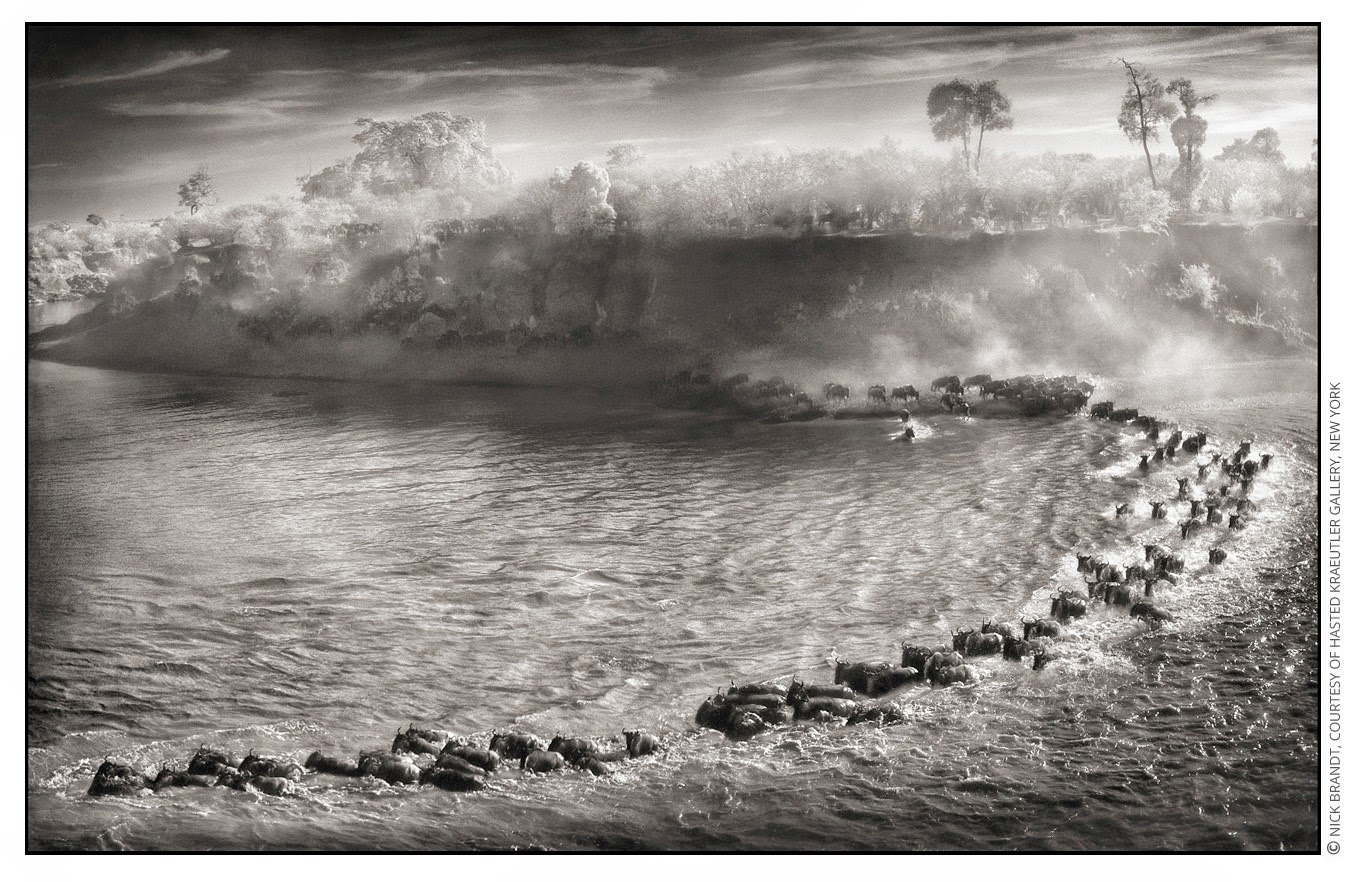 Death by Tourist.  (Read on and you will understand what I mean by that.)

I have always found the river crossings of wildebeest and zebra, in their search for fresh grass on the other side of the river, incredibly moving and courageous.

For this photo, we waited for a couple of days as the wildebeest gathered on the opposite bank, looking like, at any minute, they were finally going to (literally) make the leap. But as is so often the way, something would unnerve or distract them, and they would retreat.

Sometimes on these waits, it’s the zebras that finally decide to make the first jump, as if they grow impatient with the wildebeests’ group indecision, and decide, “oh, fer chrissakes, well, we’re going”, at which point the wildebeest group-think, “oh, yeah, okay, we’ll come too”).

Frequently at these crossings, you find yourself tensely watching as the crocodiles close in on a chosen wildebeest swimming across the river. Will it make it in time? Closer the crocodiles swim....closer....closer...and as the wildebeest makes it to the other shore with crocodile just a few feet away, we simultaneously sigh with relief, cheer and applaud.

But..sometimes, tourist vehicles with ignorant guides and tourists will position themselves on the river bank right at the wildebeest exit points - in order to get a better / more dramatic view. In so doing, they block the wildebeests' exit, forcing them to panic, tumble back down the bank and try to cross back to the other side. In so doing, some drown, exhausted. It is especially heartbreaking when mother and calf are separated. The calf is doomed at this point.

Tourism is a vital component in the survival of these creatures and these ecosystems, but it has to be responsible tourism. But this is not it. So if you are on safari with some idiot ‘guide’ trying this stunt, please tell them to back off and educate them that they are likely causing the death(s) of wildebeests.

(By the way, that did not happen during the crossing depicted in this photo. And everyone who did the swim across in this particular shot made it, as I recall.)

Posted by Unknown at 5:56 PM No comments: 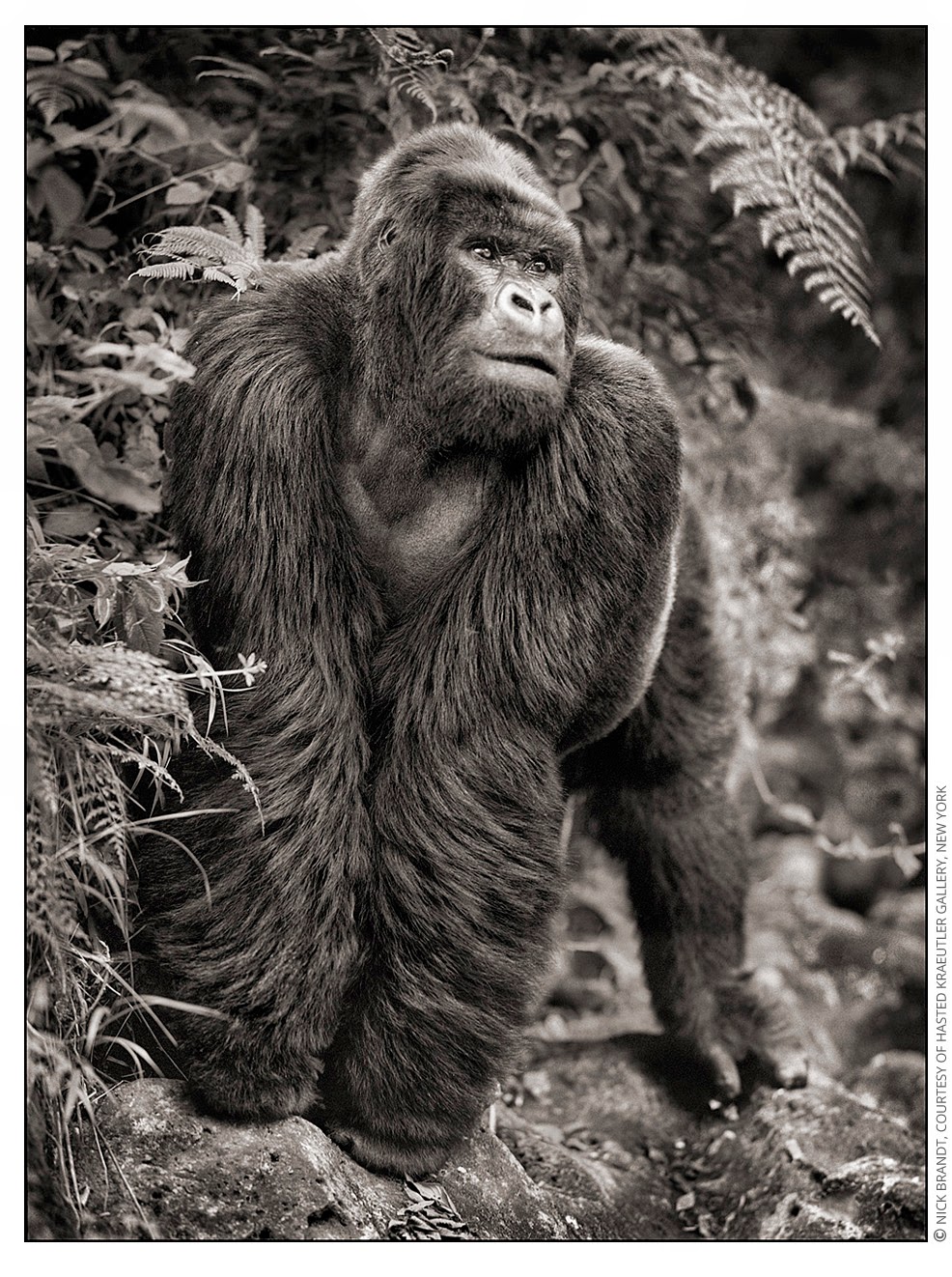 If only all my subjects were as accommodating as this silverback gorilla in Rwanda.

In March 2008, I trekked up to the gorilla groups in Rwanda for six days in a row, to try and take their portraits. You’re only allowed one hour a day with them, so the pressure is on. The rangers take you in groups of eight, but I bought all eight permits so that I could be alone with the gorillas for that precious hour, free to move around them to get the right angle with no-one in the way or in shot.  An expensive way of doing things, to put it mildly.

But for the first five days, the gorillas just rubbed my nose in it, spending every minute of each of those short hours sitting waist deep in wild celery, contentedly munching on the stuff, bathed in ugly bright sunlight.

More than ever, I needed cloud cover. Hard sunlight, which I am no fan of in my photos, looks especially terrible on gorillas, transforming their liquid eyes into impenetrable dark sockets.

But then, on the last day, with just 20 minutes of the trip to go, this beautiful giant silverback male walked down into a small river bed, and stood on a rock, appearing to pose.

I clambered down into the river bed to join him. He just stayed there, allowing me to photograph him from head to toe. I frantically reloaded my camera (ten shots per roll with medium format 6x7 film), expecting him to move at any second, but nope, he stayed right where he was, posing away.

Afterwards, the park rangers said that they had never seen a gorilla do anything like that. They were generally always deep in the forest’s vegetation.

So I considered myself very fortunate to have gotten this photo. Once home, this frame was the one that most moved me, but blowing it up large - the print is 42x55 inches (107x140 cm) - I discovered that shooting in such a dark setting, aperture wide open, with such shallow depth of field, that one of his eyes was a little out of focus. I realized that because of my poor focusing, the gorilla’s two front legs dominating the frame were pin sharp. With their luxuriant glossy fur, this made the photo work better than if I had gotten the focusing conventionally correct.

SIGNED copies of the new printing are also available now at www.photoeye.com)