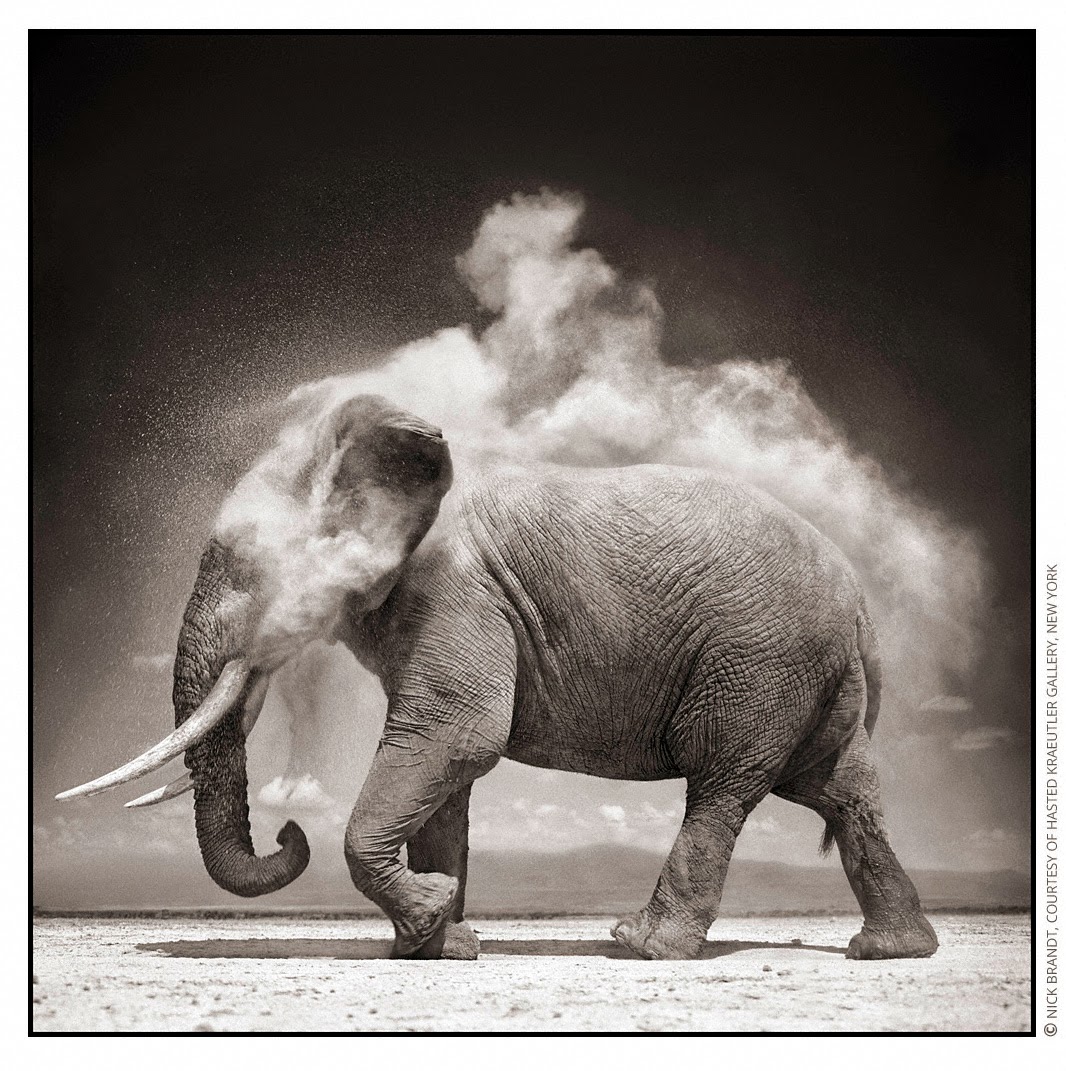 From the least inspiring of origins : A lesson in keeping your - or more to the point, my - mind open.


It was a cloudless sunny afternoon, the kind I always regard as un-photographable, when I always feel that there is no point even pulling my camera out of the case. I have convinced myself that I can only shoot with cloudy sky backdrops, that cloudless blue skies are ugly and devoid of atmosphere.  However, in this instance I was (gladly) wrong.

This big bull elephant came ambling by, very relaxed. In spite of that, I couldn’t see any point in photographing him in such terrible midday overhead sunlight, and against such a boring backdrop of clear sky.

But Ninian, my guide, insisted that since we were doing nothing, I should stop being such a pessimistic git and try taking a photograph of the elephant. So we followed him across the bare pans. And as he walked, he dusted himself.

For that split second moment, the effect was quite beautiful. The dust effectively became the clouds in the sky that I always crave. In fact, you could view the photograph from the perspective that the elephant actually looks like a giant walking through the clouds.

This photograph is an anomaly within my work in one other respect. It is a photograph of an animal in action. Typically, I have no interest in taking photographs such as this. I prefer to photograph animals in a state of Being, taking their portraits in an attempt to capture a sense of their personalities, their spirit.

So in two regards, I broke my ‘rules’ here. And I am glad that I did.
So the photographic moral of the story: don’t be a pessimistic git. (One that I continue to have not learned, it has to be admitted).

Technical : As usual, the photo was shot on medium format black and white film, without zoom or telephoto.

The reprint is available on amazon.co.uk at :
www.amazon.co.uk/Nick-Brandt-Earth-Shadow-Falls/dp/1938922441/ref=dp_ob_title_bk

SIGNED copies of this 4th edition printing of the book are also available now at http://www.photoeye.com/bookstore/citation.cfm?catalog=ZE223
Posted by Unknown at 5:14 PM 2 comments: 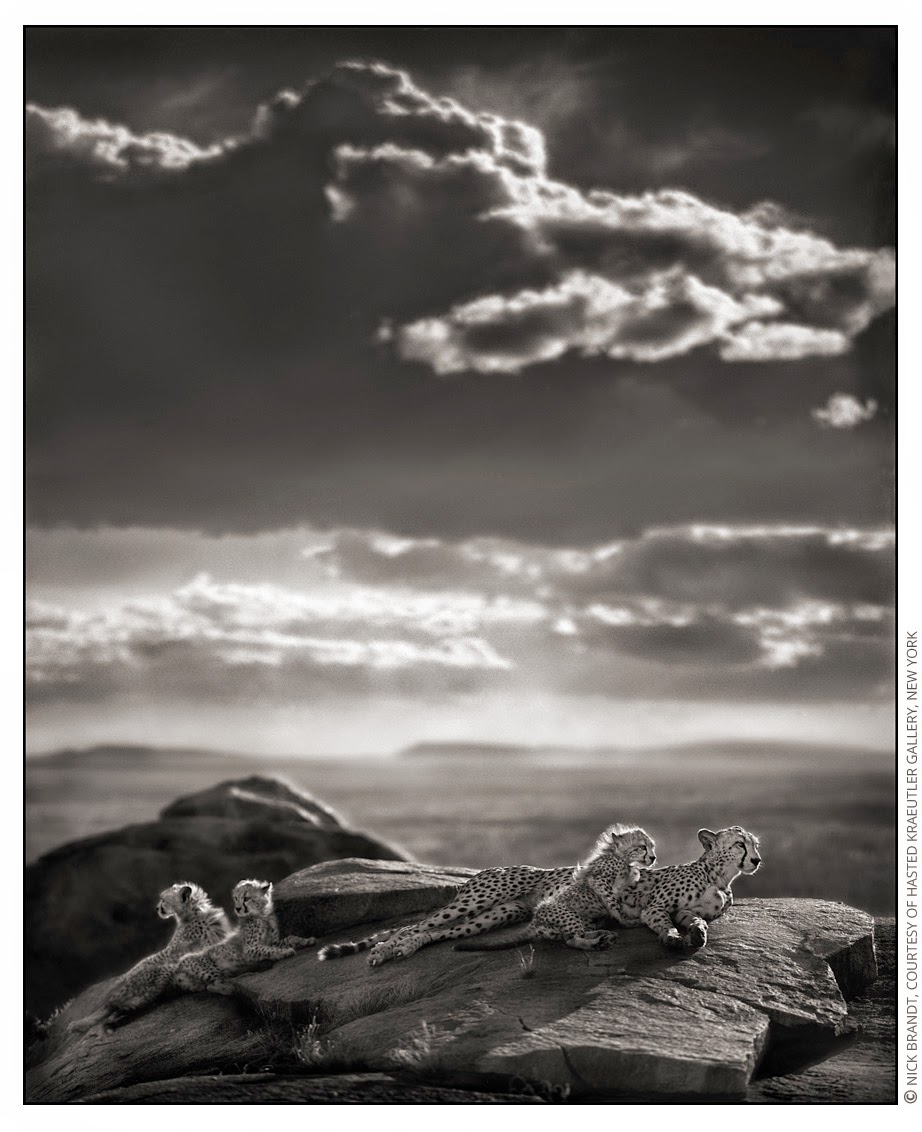 The Importance of Clouds. Discuss.
I love photographing in East Africa. But I like my clouds specially imported from Northern Europe - somber, gloomy, melancholic. Now, truth be told, the clouds in this photo are pretty obviously African - a classic stormy East African build up of cloudy drama.

But imagine this photo with clear blue skies. Boring. It would not have made it off my contact sheet into the scanner. But with all this dramatic cloud dominating the negative space, this photo became a keeper.

Of course, the (tiresome) cynics amongst you will say, well, you could have just added in the clouds afterwards. Yep, you’re right, I could have. But really, how disappointing. And I always find - and you will hear me say this repeatedly - if you are patient enough, what nature eventually gives you is way better and more surprising than what you might have manufactured in Photoshop. So I stick with Nature.

Talking of that, the Frustration of Waiting: Discuss.

Trying to get good photos here in this particular part of the world - an area of the Serengeti -  is pretty much as hard as it gets. The kopjes, the rocky outcrops here - are spectacular, but waiting for all the elements to align - the animal in the right place at the right time in the right light - is incredibly frustrating. Days, weeks go by without getting a good shot. Or any shot. The cats are sleeping, or the sky is too blue, or the animals have just eaten, or they’re too high on the rocks, etc etc etc. It feels like one (I) will never get a good photo again.

It’s a case of swinging hoops, all swinging out of sync, and you wait for that one statistically unlikely, very brief moment when, for a split second, the hoops all swing in unison. And when they finally do, it almost seems...easy. Until it feels impossible again.

The cheetahs - well, this was one of the last times I saw many cheetahs here in this area that used to be well-known for them. I have not successfully photographed a cheetah since 2008. There are now just an estimated 9,000-12,000 left on the entire African continent. There are fewer and fewer places that they can survive as man encroaches ever more rapidly on wildlife habitat, their ability to hunt compromised.
I hope that these three cubs survived and are currently out there somewhere, moving  through the Serengeti grass, living their lives to the full.

Technical : as always, shot on medium format black and white film with a Pentax 67II, no telephoto or zoom.
By the way, viewing the photo at this size on the computer screen sucks. (But I could say that about all the photos). You need to see them as the large prints that they were intended to be. But in the absence of that, the books are a good interim compromise (how’s that for a sales pitch). So, if you wish to treat yourself to aforementioned good interim compromise....

SIGNED copies of this 4th edition printing of the book are also available now at
http://www.photoeye.com/bookstore/citation.cfm?catalog=ZE223