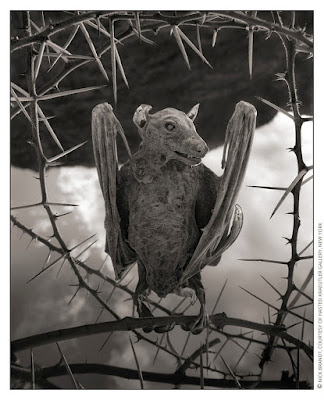 The photographer sighed wearily, part 2. Yes, the photo is meant to be this way up. The bat is hanging upside down, as you will see from the sky being at the bottom of the frame.

I visited the lake whilst traveling through one the more stark areas of East Africa taking photos for the last book, Across The Ravaged Land, in my trilogy. It was dry season, so the waterline had receded revealing these petrified creatures along the shoreline. I thought they were extraordinary - every last tiny detail perfectly preserved down to the tip of the bat's tongue, the minute hairs on his face.

Each day, me, my guide, and a few local Maasai would walk up and down the lake's shoreline, scouring for birds and bats. It was like a morbid treasure hunt.

In the instance of the bat, I placed a series of acacia thorns, the main tree around the lake, around it - photographing its portrait far closer than I ever could if it were living.