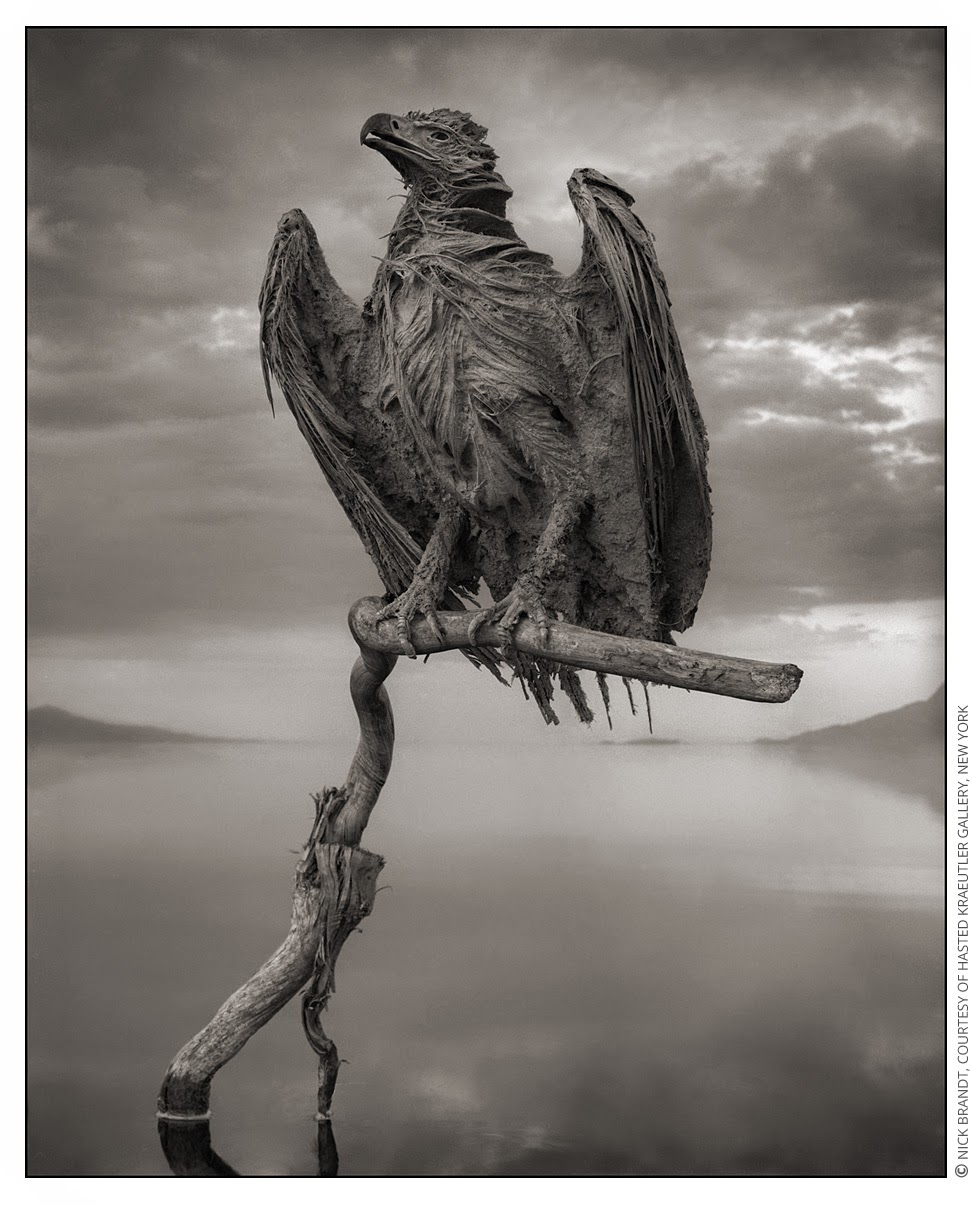 I visited the lake whilst traveling through one the more stark areas of East Africa taking photos for the last book, Across The Ravaged Land,  in my trilogy. It was dry season, so the waterline had receded revealing these petrified creatures along the shoreline. I thought they were extraordinary - every last tiny detail perfectly preserved down to the tip of a bat's tongue, the minute hairs on his face.

Each day, me, my guide, and a few local Maasai would walk up and down the lake's shoreline, scouring for birds and bats. It was like a morbid treasure hunt, with the entire fish eagle being the most surprising and revelatory find. His outspread wings, as if opening them to dry them in the sun, were fixed in exactly that position when he died.

In the instance of the fish eagle, we placed him on a strong branch pushed into the shallow water of Lake Natron - photographing his portrait far closer than I ever could if he were living. 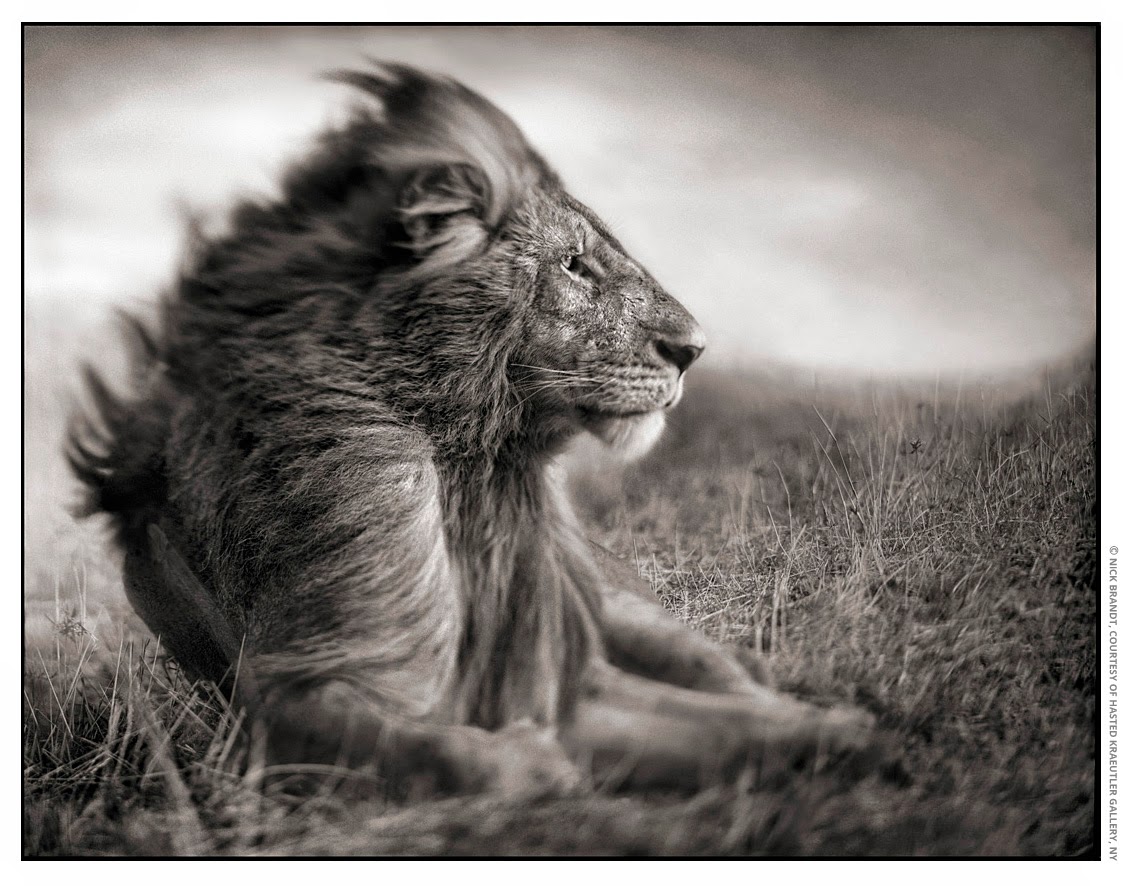 I try to photograph wild animals in the same way that I would photograph a human being. The difference is that I have to wait for the animals to present themselves, to ‘pose’, for their portrait. In this way, I am attempting to show the animals as sentient creatures not so different to us (although frequently they are better than us...but I digress).

Just as a portrait photographer might be captivated by a striking, characterful face on the street, so I'm drawn to a particular animal that I want to photograph.

So it was with this lion. I spent seventeen straight days with him. Waiting. But all he did was sleep - hour after hour, day after day -under a boring cloudless blue sky.

Finally, on the evening of the eighteenth day, a monumental storm rolled in. Just ahead of the storm came an incredibly powerful wind. The moment that the wind hit the lion, like a freight train, he sat up, facing into the wind, smelling the game on the air. After all these days spent in each other’s company, he was oblivious to me taking photos so close to him.

Shot as always on medium format black and white film without telephoto or zoom, the photo has shifting planes of focus that occur in camera at time of shooting, using a very crude poor-man’s version of a tilt shift lens. Some think they can achieve this in Photoshop, but that’s a physical impossibility - this ‘effect’ can only be achieved in camera.

Meanwhile, it is necessary to mention that the lion population of Africa is plummeting. There are now just an estimated 20,000 lions left across the entire continent, a drop of 75% in just 20 years.

In the Amboseli ecosystem, where Big Life Foundation operates, the organization I co-founded to help protect the wild animals of that part of the world, so far we are succeeding in maintaining the current lion population, through a compensation fund for the local communities when they lose livestock to predators. Go to www.biglife.org to learn more. 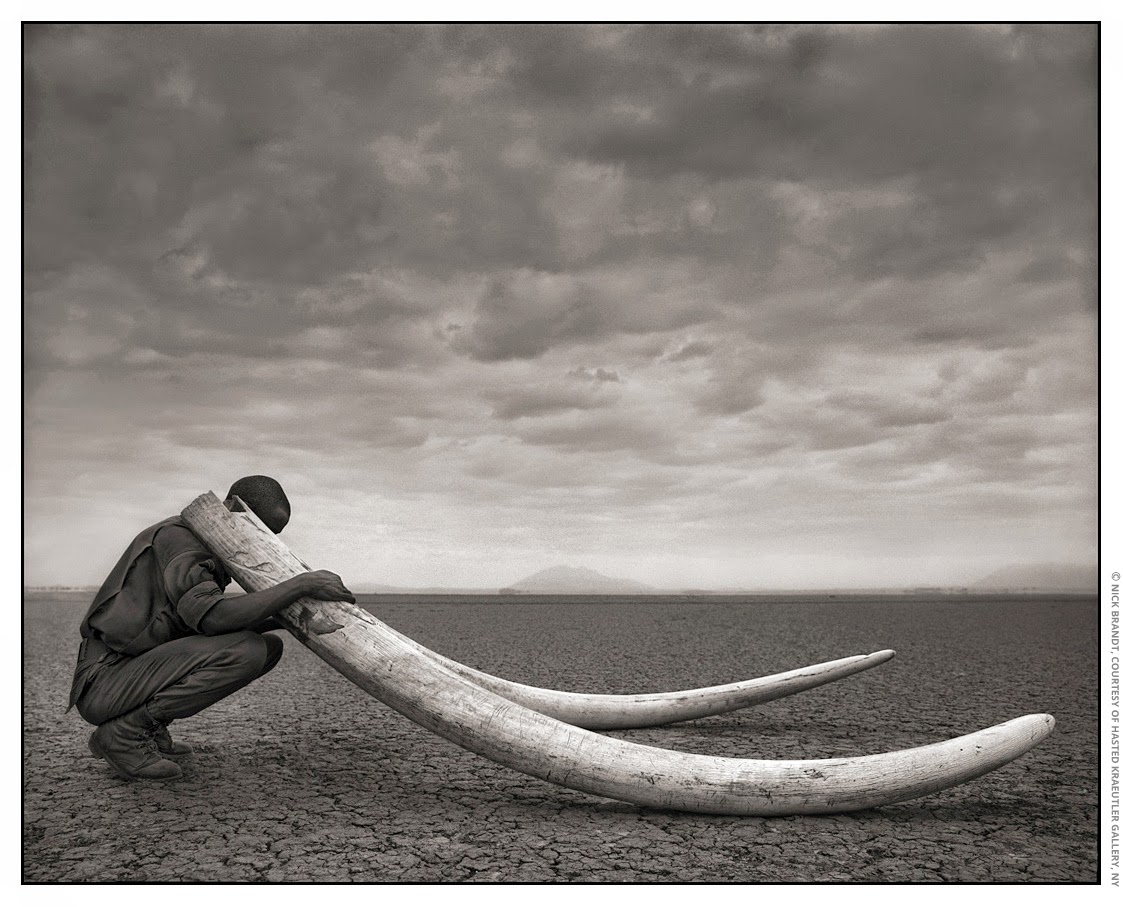 #2 : RANGER WITH TUSKS OF ELEPHANTS KILLED AT THE HANDS OF MAN, AMBOSELI, 2011

I find it hard to imagine the living elephant that possessed these tusks. I’ve never seen elephants with tusks anything like this size, and now, I never will. They are all gone, dead, mostly killed by man.
Even with one part of each tusk embedded in his skull, this elephant would still surely have had to lift his monumental head to prevent them from dragging like excavators through the earth.
Those two gargantuan tusks, that bounty, would likely fetch in excess of half a million dollars in China today.
The elephant was killed by poachers in Tsavo in southern Kenya in 2004. His tusks were stored in Kenya Wildlife Service’s ivory strongroom. In July 2011, they permitted me to borrow these and many other tusks of elephants killed at the hands of man for the ranger series. These photos feature rangers belonging to Big Life Foundation, the organization that I co-founded to help protect and preserve the wild animals of East Africa. Please go www.biglife.org to learn more.
Photographed as always on medium format black and white film, I waited several days for the normal clear blue skies to disappear, waiting for the right somber cloud cover to take the photos.
The photograph is featured in “Across The Ravaged Land”, available on Amazon.com (SIGNED copies available from www.photoeye.com)

Posted by Unknown at 3:50 PM No comments: 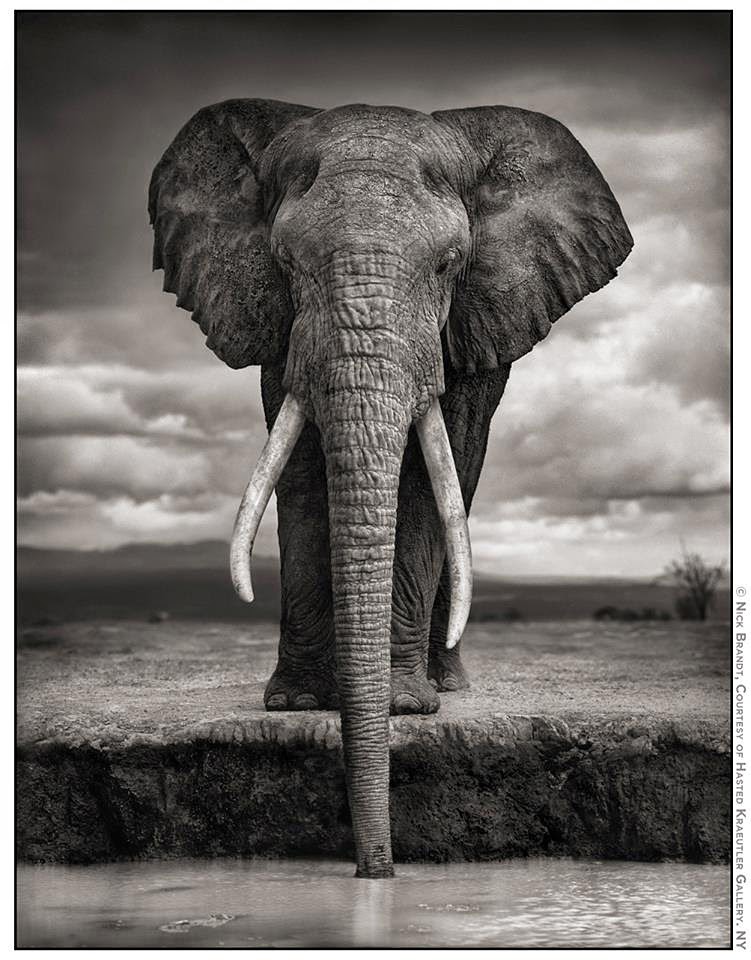 His name was Igor (as named at birth by Cynthia Moss of Amboseli Elephant Research). For forty-nine years, he wandered the plains of the Amboseli ecosystem in East Africa. A gentle soul like most elephants, he was so relaxed that in 2007, he allowed me to come within a few feet of him to take his portrait.

Two years later, it was perhaps this level of trust that allowed poachers to get close enough to kill him and hack out the tusks from his face.

And so it was that in late 2010, Igor became the unfortunate poster child of Big Life Foundation, the organization that I co-founded to help protect and preserve the widl animals of East Africa, and Igor's home, the Amboseli ecosystem, Big Life's pilot initiative project. (To learn more about Big Life, please go to www.biglife.org.)

In terms of the technical side of the photo, as many of you know I only shoot medium format black and white film on a Pentax 67II without zoom or telephoto lenses. I have overheard people looking at this print, saying they are convinced that I shot the photo in a studio. It's actually this quality that I like about the photo. When I first viewed the contact sheet, I thought that the background looked like a scenic backdrop on a sound stage, with Igor lit by a soft spotlight off to one side.

(This photograph is published in "On This Earth, A Shadow Falls:. It will be back in print in July 2014, but until then, SIGNED copies are available at www.photoeye.com).
Posted by Unknown at 10:11 PM 4 comments: