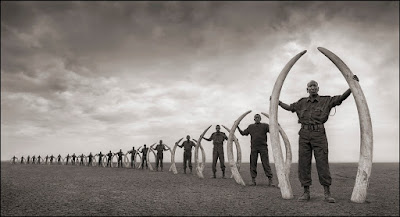 #12 :
LINE OF RANGERS HOLDING TUSKS KILLED AT THE HANDS OF MAN, AMBOSELI 2011

I wish that I had never had to take this photo.

I wish that it had never been possible to take this photo.

The photo was taken as a deliberate visual echo of Elephants Walking Through Grass, a very different world - a vision of paradise and plenty - taken only a couple of miles away three years earlier.

But instead of a herd of elephants striding across the grassy plains of Africa, here we see only their remains: the tusks of 22 elephants killed at the hands of man within the Amboseli/Tsavo Ecosystem.

The tusks of the elephant at the front? I find it hard to visualize the living elephant that possessed them. I’ve never seen elephants with tusks anything like that size, and now, I likely never will. They are all gone, dead, mostly killed by man, for their ivory.

So I think it’s safe to say there is no elephant left alive on the continent of Africa with tusks that size. Those two gargantuan tusks would probably fetch in excess of half a million dollars in China today. Perhaps more, as investors start to gamble on the elephants’ extinction, as the numbers of elephants in the wild plummets and tusks such as these become such a rarity.

However, everyone, please know that there is hope ---

The rangers holding the tusks are some of the 300 rangers employed by Big Life Foundation, the organization that I co-founded in 2010 to protect the animals and ecosystem of this region.

Today, these rangers protect the elephants and other animals of this unique and extraordinary ecosystem across a 2 million acre area, straddling Kenya and Tanzania.

Since Big Life was founded, the incidence of poaching has dramatically dropped in the ecosystems that the rangers patrol, one of the unfortunately few success stories in conservation currently in Africa.

But it is not easy to maintain this success. We need financial support. We need to expand into areas where the elephants and other animals are still being annihilated. So please, go to www.biglife.org to learn more, and donate today!

Technical :
The tusks were stored in Kenya Wildlife Service’s ivory strongroom. In July 2011, they permitted me to borrow them. Shot as always on medium format black and white film, the photograph is published in “Across The Ravaged Land”, available on Amazon.com, etc.